We’re seeing it everywhere these days:  adults, as well as teens, have taken up the new fad of “vaping” or “Juuling.”  The Centers for Disease Control found that from 2017 to 2018, e-cigarette use increased 78% among high school students and 48% among middle school students.  But what is vaping, exactly?  It is the process of inhaling a liquid (or “e-juice”) that has been heated to become an aerosol using a cigarette-like delivery system.  These liquids can contain differing ingredients, including nicotine, cannabis products (including THC, cannabinol, etc.), and various flavorings.  Some manufacturers of these products have even used the marketing angle of calling vaping the alternative for “safe smoking.”  What do we know about the overall effects of vaping on our health?

Studies about the effects of vaping are still ongoing.  The truth is, we still don’t know a lot of the long-term effects.  What we do know is that there are some side effects, and those seem to be directly linked to certain e-juice ingredients.  Of course, since we are a dental office, we want to first focus on the negative effects on the teeth, gums, and oral cavity.

A study out of UCSD School of Medicine found that the grooves and pits of teeth of those that vape had more bacteria in them.  These same bacteria are responsible for cavities and gum disease.  This is likely because these aerosols have some of the same chemical properties as “gelatinous candies and acidic drinks.”

Two of the main base carriers for e-juices are propylene glycol & vegetable glycerine.  Propylene glycol is an FDA-approved food additive, but not one without effects on oral health.  Because of its chemical nature, it affects oral health in multiple ways.  It causes dry mouth, which plays a major factor in gum disease and increases your cavity risk.  Not only that, but it breaks down into acidic byproducts in the mouth, which raises these risks even more.   Vegetable glycerine on its own has little effect on oral health.  However, when combined with the flavorings added to most e-juices, studies have shown that there is a huge increase in the number of bacteria sticking to the teeth, which also increases the risk for dental decay.  Not to mention the bad breath…

One 2016 study suggests e-cigarette use triggers an inflammatory response in gum tissues.  What does this mean?  Those who are vaping on a consistent basis are contributing to an increased risk of periodontal and gum disease.  It’s even worse when the e-juice contains nicotine or menthol.  This constant inflammation also disrupts DNA repair in the cells of these tissues.  While no direct link has yet been established between vaping and oral (or lung) cancer, it is known that the inability for cells to repair their genetic coding leads to an increase in cancer risk.

Another important point is that of a lithium battery explosion.  As you may have seen in the news, there have been multiple instances of the batteries that power these vaporizers exploding or catching on fire.  Some of these have occurred when the user had the vaporizer in their mouth, causing lacerations of lips, gums, cheeks, and loss of teeth.  One man in Texas even lost his life when the shrapnel from the explosion sliced his jugular vein.  Though this is rare, this is obviously a detrimental effect to the oral tissues.

A colleague, Dr. Scott Froum, mentions an interesting case that highlights some of these problems.  He mentions a man who had gone 35 years without cavities.  Once he stopped smoking cigarettes and took up vaping, he developed cavities on the front teeth within a year (see below).  This is the area that the vaping aerosol hits first.  He also developed a dry mouth which contributed to the problem.  This is not an isolated case, and we expect to see an increase of cases like these with the increase in prevalence of vaping. 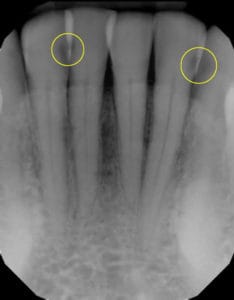 With the legalized marijuana movement growing in this country, the rise of cannabis (THC) cartridges (or “dabs”) has risen also.  But make no mistake – this is not the “weed” of the 70’s.  A recent study out of Johns Hopkins found that the THC concentration within the blood was higher in those that vaped with THC cartridges compared to those that smoked marijuana.  This leads to a higher level of intoxication at school, at home, behind the wheel of a vehicle, etc.  Also keep in mind that many of these products are much easier to inhale and hold, and are often flavored like “creamsicle” or “cotton candy” – you can see the problem.  Though advocates for these vaping products say this is better for those who want a more controlled dose of THC, this makes these products incredibly dangerous for our young people.  I have a family member who is a high school administrator, and they have personally seen a large increase in the number of kids high at school due to vaping THC cartridges.  Parents and teachers have a hard time detecting this other than behavior due to the lack of scent.  Let’s not forget to mention that within many states, it is illegal (in Texas it is a felony) to be in possession of these cartridges.  With the lack of studies on this age group, I believe it is only a matter of time before we start to see a health crisis on our hands.

It may not be all bad though for one particular group of individuals: current tobacco smokers.  One 2016 study  found that switching to vaping from tobacco cigarettes was associated with overall improvement in oral health, including decreased plaque levels and gum bleeding.  One 2018 study compared three groups: one who smoked cigarettes, a group who vaped, and a group who did neither.  Those that smoked tobacco cigarettes were more likely to have higher levels of inflammation during their dental hygiene appointment than those who vaped or did neither.

Ultimately, we are in a a similar situation that was seen in the 1930’s and 40’s.  Back then, the long term effects of cigarette smoking were unclear.  They were even touted as being healthy by physicians.  But eventually, the science caught up with the marketing, and we now know the truth.  As the science begins to catch up, I believe we will see the evidence of the detrimental effects grow.  Unfortunately, until then, I believe we will continue to see the increase of use, especially amoung younger populations, and the cases of side effects will increase as well.  We did not even touch on the negative effects to the throat and lungs…

I do not personally recommend vaping to anyone other than long-term smokers who are trying to eventually quit smoking altogether.  Even with this group, we bring them in more often to monitor their oral health more carefully.  I encourage anyone out there who is vaping to first – quit.  Second, If you choose not to, you definitely need to let your doctor and your dentist know you are vaping in order to make sure you are more carefully monitored.  Please contact our office by phone, e-mail, or FB messenger if you would like to discuss further.

Yours in better dental health,

Orthodontics: It's Not Only About Straightening Teeth

History of the Tooth Fairy

Your reply has been successfully received.

Thank you for Submitting your request. Our Office will get back to you.